LED lighting represents the latest development in the lighting industry. The energy efficiency and considerable lifespan of LED technology holds all the potential for changing the way organizations brighten their facilities by reducing the cost of electricity and overall energy use.

What Is LED lighting?

LED stands for light emitting diode. An LED is a semiconductor device, generating light through a process called electroluminescence. When you pass an electric current through semiconductor material, it emits visible light. As such, an LED stands in exact contrast to a photovoltaic cell, which is the cell used in solar arrays to convert visible light into electricity.

We’ve known about the technology behind LEDs for years. Contributing to the development of solid-state transistors, LED technology helped to land an astronaut on the moon and enable the creation of portable AM radios!

In the early 60s, a young scientist working for General Electric developed the first LEDs. Companies first used them as indicator lights for circuit boards, and they became known for their durability and energy efficiency. Many municipalities used the second generation of LEDs, which became available in the 80s and 90s, as replacements for the traditional incandescent bulb in streetlights. Some people began to experiment with using them as a replacement for fluorescent lights in outdoor signs.

Currently, we are working with the third-generation of LEDs. This latest generation lasts longer, is more durable, performs better and is more energy-efficient than any other source of lighting. Many industrial, commercial and residential facilities now use LEDs for a wide range of applications.

Learn About Our LED Lighting Solutions

LED lighting offers many benefits for industrial and commercial businesses that are interested in reducing their energy usage and costs. Here are some advantages of LED lights: 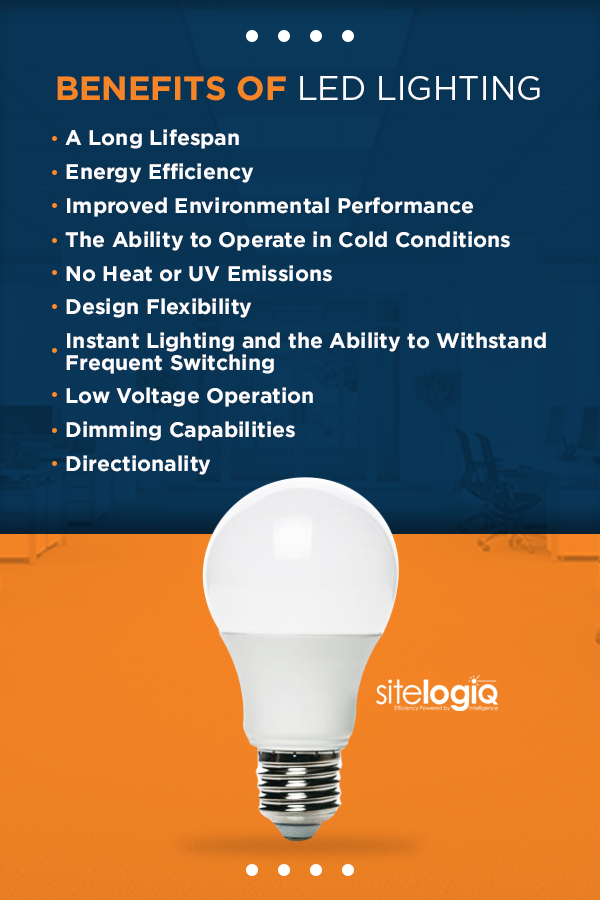 Even if you’re using fluorescent, metal halide or sodium vapor lights, an LED light will last at least two to four times longer.

As such, savings extend not only to replacement costs but also to the maintenance costs of your company’s lighting bill.

Another one of the leading LED lighting advantages is their energy-efficient operation. You can measure the energy efficiency of a lighting source in useful lumens, which describes the amount of lighting that the device emits for each unit of power, or watt, that the bulb uses. In the past, we measured light by how many lumens it produced, but the reality is that some of these lumens go to waste. LED lighting produces less waste light and more useful lumens than other lighting technologies.

These improvements in energy efficiency are directly correlated with financial savings. When you replace a traditional light source with an LED light source, your energy usage is going to plummet, making LED lights are a smart investment for the bottom line of any business!

The environmental benefits of LED lighting also extend to their manufacturing process. Many traditional lighting sources, like fluorescent lighting and mercury vapor lights, use mercury internally as part of their construction. Because of this, when they reach the end of their lifespans, they require special handling. You do not have to worry about any of these issues with LED lights.

4. The Ability to Operate in Cold Conditions

Traditional lighting sources don’t like cold weather. When the temperature drops, lighting sources, particularly fluorescent lamps, require a higher voltage to start, and the intensity of their light diminishes.

LED lights, on the other hand, perform better in cold temperatures by about 5%. This is why LED lights are a better choice for lighting needed in freezers, meat lockers, cold storage spaces or refrigerated display cases. Their ability to perform so efficiently in cold weather also makes them the perfect choice for lights in parking lots, lights used to illuminate the perimeters of buildings and lights used in outdoor signage.

5. No Heat or UV Emissions

If you’ve ever tried to change an incandescent light bulb right after it goes out, you know how hot they get when they’re in use. Many traditional lighting sources like incandescent bulbs turn more than 90% of the energy they use to heat, allocating only 10% of energy to actual light production.

LEDs emit almost no heat, and most of the light they emit is within the visible spectrum. This feature is one reason that medical experts are looking at LEDs as a possible solution for Seasonal Affective Disorder (SAD), which affects many people during the darker months of the year.

It also makes LEDs ideal for illuminating works of art that will degrade or break down over time with exposure to UV rays.

LEDs are very small (about the size of a spec of pepper). This means that they can be used in almost any application. Remember, their original use was as an indicator light in a circuit board. If you combine them in bunches, you create a traditional bulb. If you string together a series of LED lights, you create a line or series of lights — like a string of Christmas lights.

Think of the options this gives you for lighting in your facility. LED devices can be so small you can use them for illuminating everything from a shop floor to a major league football stadium.

7. Instant Lighting and the Ability to Withstand Frequent Switching

If you’re looking for a light that needs to come on quickly, choose LED lighting. LED lights can turn on and off instantly. If you’re using a metal halide lamp, for instance, you need to be prepared for a warm-up period. Think of how a fluorescent light flickers when you turn it on and often takes two or three seconds before its fully lit. These are some of the complications that can be circumvented by installing LED lights.

Also, traditional lighting sources have a shorter lifespan if you frequently switch them on and off. LED lights are not affected by frequent switching. It does not cause any reduction in their lifespan or efficiency.

This feature makes LEDs an ideal solution for your business if you need your lights to come back on immediately after a blackout or a power surge. This capability is also useful if you want your lights to come on promptly when an employee opens a building early in the morning before the sun comes up.

Since LEDs are unaffected by switching on and off, they can be rapidly cycled for flashing light displays or applications that require sensors that frequently switch from on to off and back again.

If your business is in a location where flooding may occur, you want to be able to light your facility with devices that require as little voltage as possible. LEDs are perfect for this because they operate on very low voltage. When you use a low-voltage system in areas that may be prone to flooding, you are protecting your staff and others from potentially harmful or fatal shocks. If, during a flood clean-up, someone mistakenly touches some electrical component, a low-voltage lighting system that generates 12 volts is much safer than a line voltage system that generates 120 volts.

This also makes them extremely useful to use outdoors where other lighting solutions might not meet with local codes.

LEDs perform well at almost any power percentage, from about 5% to 100%. Some lighting sources, such as metal halide, perform less efficiently when dimmed. Sometimes, you cannot dim them at all.

The opposite is true for LED lighting. When you use less-than-full power on an LED light, it operates more efficiently. This feature leads to other benefits, as well. It increases the lifespan of the bulb, and it means that you are using less energy, thereby reducing your energy costs.

It’s important to note that you cannot use traditional equipment for dimming lights when using LEDs. They need hardware that is specific to their technology.

Every conventional lighting technology emits light at 360° around the light source. This means that if you want the light to illuminate a specific area, you’ll need to purchase accessories to channel or deflect the light in the desired direction.

If you don’t use something to reflect or redirect the light, you’ll waste energy lighting areas that don’t require illumination, which will result in higher energy costs.

An LED light, however, only lights up an area of 180°, which makes LED lighting perfect when you need recessed lighting in an industrial kitchen, hallway or bathroom. It’s also ideal for lighting artwork, not only because it will not degrade the artwork but also because you won’t lose any of the lighting power to the back of the light source.

Whether you’re looking for increased energy efficiency, easier maintenance or improved environmental performance from your lighting technology, LED lighting is the solution for you.

LED lights do cost more than traditional lighting sources but these costs fall with each passing year. Even if you have to pay a bit more upfront, what you save in the long term more than makes up for the higher upfront cost. LED lights are one of the most important developments in reducing energy usage and costs in the past few decades.

These uses and benefits are some of the many reasons that LEDs have become so popular in business applications. The Department of Energy estimated that if more businesses, companies, governmental organizations and individuals switched to LED lighting by 2027, it could save 348 terawatt-hours of electricity. That is the equivalent of the yearly output of 44 large electric power plants and results in savings of almost $30 billion for businesses, companies and individuals in the United States.

Learn About Our LED Lighting Solutions

The team at SitelogIQ can help you find the right lighting solution for your facility and ensure a smooth installation process. As a national provider of LED lighting solutions for commercial and industrial enterprises, we have 33 offices across the United States and can provide turnkey solutions and consulting for projects of any size. Our team includes energy efficiency experts, engineers and project managers who can help you make well-informed decisions about how you can use LED lighting. We’ve helped facilities like hospitals, K-12 schools, federal prisons, ice rinks and many businesses make smart energy choices.

Whether you are interested in an LED solution for a new building, manufacturing facility or plant or you’d like to retrofit an existing facility, we can help. If you would like to talk to us about LED lighting solutions for your business, you can reach us at 888.819.0041 or fill out our online contact form. We’d love to help you hear from you and help you find the right solution for your company’s unique needs.